Robert G. Schwartz of Naples, Florida, formerly of Bucks County, PA, died Saturday, November 16, 2019 at The Chateau at Moorings Park, Naples. He was 91.

Born in Czechoslovakia in 1928 to George and Frances Schwartz. They moved to the United States when Robert was 18 months old and settled in the Philadelphia area and then in Bucks County, PA where he attended local schools.

Following graduation from Doylestown High School, he entered Penn State University, graduating in 1949. He then joined Metlife Insurance Company and a year later was given time off to serve with the Army during the Korean conflict. In 1953 he returned to Metlife and began a lifelong career with the company, advancing to Chairman of the Board, President and Chief Executive Office. He received his MBA degree from New York University, attending night classes while working at Metlife.

Mr. Schwartz served on many corporate Boards including Metlife, Mobil Corporation, R.H. Macy, Comsat Corporation, Lone Star Industries, Lowe’s Companies. Credit Suisse First Boston, The Reader’s Digest and Potlatch Corporation and on Con Edison Board of Trustees. He was a member of the Business Counsel and the Business Roundtable. Other affiliations included the Urban Land Institute, The Pennsylvania Society and The President’s Export Council under President Reagan.

He has also been involved in charitable activities including the Boy Scouts of America, United Way, the Phoenix House and The Christophers.

Mr. Schwartz and his wife, Caroline, have been living in Naples, Florida since his retirement.

He is survived by his wife, two daughters: Joanne Carter, her husband, John, of Bloomfield, MI and Tracy Parks, her husband, Jim, of Marietta, GA and a son, Robert Schwartz, Jr., his wife. Mimi, of Bethesda, MD as well as five grandchildren.

Relatives and friends are invited to Robert’s funeral Mass, 11 a.m., Saturday, December 14, 2019 at Our Lady of Mount Carmel Church, 235 East State Street, Doylestown, where the family will greet guests from 10 a.m. until the time of Mass. Interment will follow Mass in St. Mary’s Cemetery.

In lieu of flowers, memorial contributions in Robert’s name may be made to the Robert and Caroline Schwartz Scholarship, Penn State University Development, 1 Old Main, University Park, PA 16802. 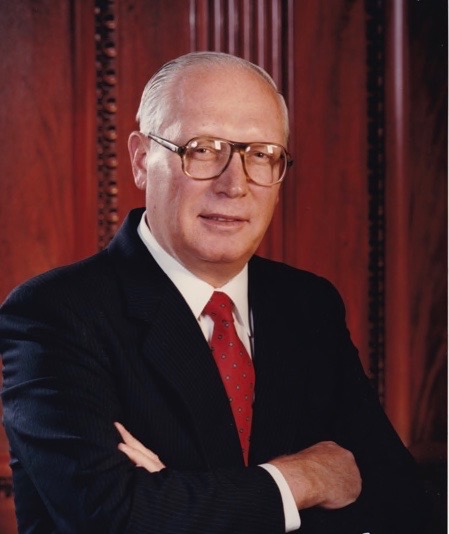