Wilbur R. Van Eysden, 95, of Jamison, died peacefully after a short illness on August 19, 2019. Bill, or “Dutch,” was born and raised in Brooklyn, New York. He was the youngest of five children of the late Joseph and Evinda Van Eysden.

Bill was a proud graduate of Brooklyn Technical High School where he majored in architecture, and an active member of Brooklyn’s Trinity Lutheran Church. Following graduation, he was employed as a draftsman prior to enlisting in the United States Navy during World War II. He attended Union College as part of the V-12 Navy College Training Program. His friendships during these years remained a source of great happiness for him throughout his life. He was honorably discharged after serving in the South Pacific.

Soon after marrying Doris M. Schefferaas in 1952, Bill took a job with IBM where he remained a loyal employee for thirty-seven years. His job took the family, including daughters, Lisa and Inga, across the country, living in New York, Maryland and California. Dutch and Doris moved to Pennsylvania in 1998 to be closer to family. He was predeceased by his wife, Doris in 2001.

He will be missed by all who knew him and will be affectionately remembered for his wit, intelligence and charm. 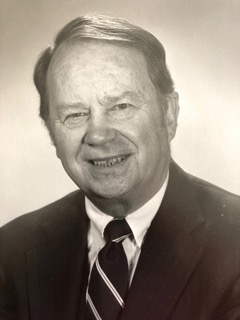